At least I’m putting some new shelves up soon, and will be able to fit all of the extras into my little room without doing the annual book clear-out (don’t make me give away any more books!).

I thought I’d share which books I received with you, and tell you why I asked for each one.

END_OF_DOCUMENT_TOKEN_TO_BE_REPLACED 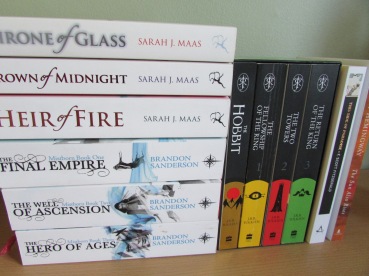 Too late to start thinking of a Summer reading plan?

With exams, holidays and generally being quite busy, I haven’t had much time to read; at least not a lot by my usual Summer standards!

I generally go with the flow when it comes to reading, and read whatever I feel in the mood for at the time, however there are some books that I would really like to get finished over this Summer, so I thought I would outline a little bit of a plan.

1) Finish The Lord of the Rings!
This is kind of embarrassing to admit as a huge fantasy fan, but I haven’t finished The Lord of the Rings. I read The Hobbit and The Fellowship back in January, and then just haven’t got back into it. They are quite dense and require a lot of attention, which I haven’t really been able to give a book for the last few months. So, to stop the embarrassment of having to admit that I have not read the books that kind of ignited what we know as fantasy fiction today, I WILL finish both The Two Towers and The Return of the Kings this Summer.

2) Read some classics.
I have sort of neglected classics recently (with the exception of Othello which I have read about 5 times in the past year for my A2 exams and am absolutely sick of), but there are a couple that I would like to read this Summer. I really want to read This Side of Paradise by F. Scott Fitzgerald, which has been sitting on my shelf for a few months now, and I would also like to read my first Hemmingway book – The Sun Also Rises. My favourite film is Midnight in Paris, and as a huge fan of the 1920s, Paris and literature, I do get most of the references, but not Hemmingway’s. I want to see if the Hemmingway of the film, is the same as the one expressed through his writing.

3) Finish the Mistborn trilogy.
I have recently finished book 1: The Final Empire and absolutely loved it! They are large books, so I intend to spend the long time I have off getting through them.

4) Re-read the Throne of Glass series
Queen of Shadows (book 4) comes out on 1st September, and I was shocked to realise how much in the previous books I had forgotten! I have already re-read Throne of Glass, and plan to get to Crown of Midnight and Heir of Fire soon! This is my favourite YA series, and I am really excited to get back into the world and characters. I mean, who wouldn’t want to spend their Summer with Chaol Westfall, Dorian Havilliard and Rowan Whitethorn?

5) Read for fun!
Do you ever read books because you feel like you should read them, rather than because you actually want to? I sometimes have a tendency to do that. One thing I have done this year is not count how many books I am reading. Instead I have a jar, and whenever I finish a book I write it on a post-it note, fold it up and put it in this jar.

I then force myself not to count the number of post-it notes in it. I’ve only given in and counted about five times *guilty smile*. It does work though, and I’ve lost track of how many books I have read, and what they all were. It’s also why I haven’t set a goodreads challenge this year – I want to read for fun – whether that is 100 books, 50 books, or 5 (I’ve read a lot more than 5, don’t worry!) I want to make sure that I read for fun, and so out of all 5 goals, if this is the only one I achieve I won’t be too harsh on myself! 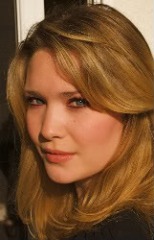 – Books read by author: Throne of Glass, Crown of Midnight, Heir of Fire, The Assassin’s Blade, A Court of Thorns and Roses

I love a lot about Sarah J. Maas’ books, but I think her writing style is so beautiful, and her world building is so great. She takes her time building very detailed and intricate worlds that are so interesting, magical and beautiful. As for my favourite of her books, I am very conflicted between Heir of Fire (book 3 in the Throne of Glass series) and A Court of Thorns and Roses (book 1 in her new series). I think both books are on the same level in terms of writing, but of course in Heir of Fire, the world and characters have already been so developed, and I have so much of an attachment to the characters, that it would probably come out slightly on top. My excitement for Queen of Shadows (book 4), coming out 1st September, is so ridiculously high! She creates such well-defined, interesting characters that are always so different from each other with, well-developed backstories and story arcs, whether a main or side character. Also, you should check out Sarah’s Pinterest boards for her books – they will get you so excited to read her books if you haven’t already!

– Books read by author: A Darker Shade of Magic, Vicious, The Archived, The Unbound

I think what I love most about Victoria (V.E) Schwab’s books are the actual plots. The story arcs of her books are so interesting, and keep you hooked and on the edge of your seat the whole way through. Also, the worlds – especially A Darker Shade of Magic, which includes alternate, parallel Londons with varying degrees of magic, are just cool! The Archived got me through quite a low time and I will always love the book for that, and A Darker Shade of Magic (which was the first book of her’s that I read, and the most recently published) is so gripping and interesting, and the book that made me realise I would have to read all of her books.

For definite, the thing that keeps me reading Maria V. Snyder’s books are the characters. They are just so well defined and I love the way that she makes a character that you shouldn’t like, so likable. I love her sense of humour throughout her books too, through characters and internal dialogue. Especially Ari and Janco in the Study series and their banter and sarcasm! I recently went to a book signing of her’s, and her real life humour is just like that in her books. My favourite book is Poison Study. This was the book that actually made me fall in love with fantasy (not Harry Potter or Narnia!), and started my long love of the genre, as well as being the book that inspired me to start writing fantasy too. The romance, politics and sensitive topics covered add up to make a fun, beautiful and emotional rollercoaster of a story.

– Books read by author: Shadow and Bone, Siege and Storm, Ruin and Rising

With all other authors on this list, I have read more than one series/world, but I have only read the Grisha trilogy by Leigh Bardugo. I don’t re-read books a lot, but I have re-read this trilogy. The world is so unique and interesting. I have a real interest in Tsarist Russia (particularly the later Tsars) and so the spin on Tsarist Russia for her fantasy world of Ravka was so fascinating and fun to read. I think I have given all three of these books 5 stars, but if I had to have a favourite it would probably be Ruin and Rising. So often, the last book in a series or trilogy leaves me just a little annoyed; an anti-climax after a story that I have invested time and energy into reading, but not with this book. It was a really great conclusion to the trilogy, and I loved the way things wrapped up. I thought that characters and relationships were drawn to a satisfying conclusion, and I loved how unexpected, and how many twists and turns the story held. It may well be my favourite YA trilogy, with some of my favourite characters of all time (yes, I’m talking about Nikolai!).

– Books read by author: The Great Gatsby, Basil and Josephine, The Curious Case of Benjamin Button and other stories

I have only read one novel by F. Scott Fitzgerald, and then collections of short stories. I hardly ever read short stories (I find that they are not quite long enough to tell a full story and develop a character or world) but F. Scott Fitzgerald is an exception. I love the way he captures the 1920s, the Jazz Age, and people in it. I find that he generally creates characters that you don’t particularly like, but it is certainly his writing style and story that carries them through to greater meaning. I own more of his works and I hope to read all of his novels at some point *adds to already rather long bucket list*. Basil and Josephine was an unexpected love. I decided to read it for a short story I had to write for some A-level coursework this year, and really enjoyed them. It is a collection of the Basil stories and the Josephine stories that Fitzgerald wrote for the Saturday Evening Post. Despite not particularly liking the characters in the beginning, I found myself really rooting for them, and becoming very invested in their lives and affairs, to the point where I actually did like them by the end. The writing is so beautiful, (from the first page, it reads: “Fool for love was Basil from now, and not just at a distance, but as one who had been summoned and embraced, one who had tasted with piercing delight and had become an addict within an hour”) and I have so many post-its sticking out of it with favourite quotes, or just beautiful sentences. Fitzgerald knew how to craft words and sentences! I would recommend the collection to anyone wanting to get into short stories, but wanting them to last long enough to read developed characters.